Growing up in church we always sang hymns from a large hymn book that was placed in holders on the back of the church pew.  Many times there would also be a Bible there.  The “song leader” would announce the page number before each song and we would all turn to that page and sing from the hymn books which had both the words and the music printed for us.  (In some churches the page numbers would be listed in the bulletin or posted on a sign at the front of the church.)

Depending on the local church, the singing might be accompanied by a pipe organ, an electric organ and piano and maybe even a few guitars or drums. 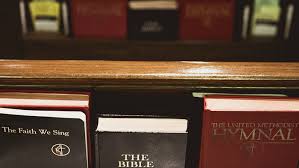 This was how worship was supposed to be done.

Slowly over the years in the churches I attended the organ became a thing of the past and the piano was replaced by the keyboard.  A few guitars became many guitars.  Song leaders were replaced by worship teams.  Hymn books became obsolete as the words were projected on a screen from an overhead projector.  Finally, the hymns I grew up with were replaced by what we call “contemporary music.”

Gone were the days of the great song writers like Charles and John Wesley, Fanny Crosby and Isaac Watts.  This was now the time of Chris Tomlin, Michael W Smith, Amy Grant and Matthew West.

And the music war began.

Arguments went back and forth.  Some said we needed to use music that would reach the younger generation and keep them in the church, or in some cases, bring them back to the church.  Others said we were showing disrespect to the older generation that had worked hard in the past so that the church even existed.

I have found it so sad that we have had this music war.  While I understand the desire to have worship that we feel comfortable with and really like, I question:

Recently I began reading a book “The Hymnal – A Reading History” by Christopher N Phillips.

I discovered that this war on music in the church is not a new thing.

Mr. Phillips has studied the practice of reading and using hymnals going back to the eighteenth and nineteenth centuries.  He relates that Isaac Watts created a small hymnal with only words.  These hymnals were not kept in the pews at church but rather were owned by individuals who used them not only for worship in church, but as a source of devotional reading.  They would carry their hymnals back and forth to church much like we used to do our Bibles.  Many learned to read by using the hymnals as a text book and the songs were memorized as poetry.

Up to this time the worship in churches had been to read only songs taken directly from the Psalms.  When Watts began introducing hymns (songs written about God but not taken directly from scriptures) there was controversy between those who welcomed the new hymns and those who said the church should only use psalms.

Examining old hymnals Phillips found that family members used them to record special events and even wrote notes in them during the church service to share with one another.  In one hymnal he examined he found written notes in two different hands:

What are you laughing at?

In one hymnal he found comments on the fashion and appearance of other members.

Mrs. Horatio Fisher has got a new bonnet!

Ellen Stearns looks at this distance like Mrs. Frank Cutter.

As hymns became accepted and replaced the psalms or were used with the psalms,  churches began to use hymn books as a mark of membership.  Phillips writes:

“Only the most ambitious and radical new communities made the effort to produce a new translation of the Bible, but every group seems to have shared an impulse to create its own hymn book.”

At first even the hymns were read more often than sang as there was no musical notation for the songs.  Slowly musical notation for the hymns was developed.  Only a few who were trained in music would purchase the books with the notes since printing both words and the notes was very expensive.  As some became trained in music choirs developed to sing the new hymns.  Most of the congregation still had hymn books with the words only and read along as the choir sang.

Then Henry Ward Beecher came along.  A minister at Brooklyn’s new Plymouth Church,  he wanted his congregation to sing the hymns in church.  He felt a strong need for his people to get beyond intellectual consent to the Gospel and to actually have an emotional response to the good news.  Music was a way to do this.  If he could get the music into the hands of his congregation they would sing and thus engage personally in worship awaking their emotions and heart as well as their intellect and mind.

So – began another war on music in the church.