Me holding the walking stick my grandson made me to help me with my arthritic knees.  It stands by my front door as a daily remind of his grandson’s love for me.

Today is the birthday of one of my grandsons, Matthew.  Remembering when he was born, I always stop and thank God that he is here with us.  Shortly after Matthew was born, they had to send him by helicopter to Children’s Hospital in St. Louis.  His lungs were not developed enough and he was placed in NICU.  They told us

“IF he makes it through the night, his chances to live will go up.  However, he will probably always be weak and ‘puny’.”

I still remember my daughter and son-in-law’s faces as the ambulance crew came in the room to take Matthew away.  The pain and fear in their faces were beyond description.  While I was so worried as the grandmother, I cannot begin to imagine what they must have felt.

My son-in-law, Rob, is a St. Louis Blues hockey fan.  When their first two children came home from the hospital, they were wearing St. Louis Blues shirts.  When Rob realized Matthew would not be staying at the same hospital as his mother and would be at a hospital several miles from us all, he brought a hockey puck and asked if he could leave that with Matthew.  I thought my heart would break, as I saw him lift the incubator curtain placed over Matthew’s crib to place the hockey puck close by his side.

As my husband loves to say, “It’s not over until God says it’s over,”  Matthew not only made it through the night, he has grown up to be anything but weak and puny.  Standing at over 6′ 7″ tall, he is a giant of a man.  Strong and not one to mess with, yet he has a gentle way about him with little kids and his grandma.  Because of his kind ways to me, I began thinking of him as a “gentle giant.”   That is also the name his mother’s students have given him.  He has several times helped his mother with recess and special events for her kindergarten and first grade students.  They love this “giant” of a man who is so gentle and kind with them.

Happy day with my two grandsons.  Matthew is the handsome one on the left. 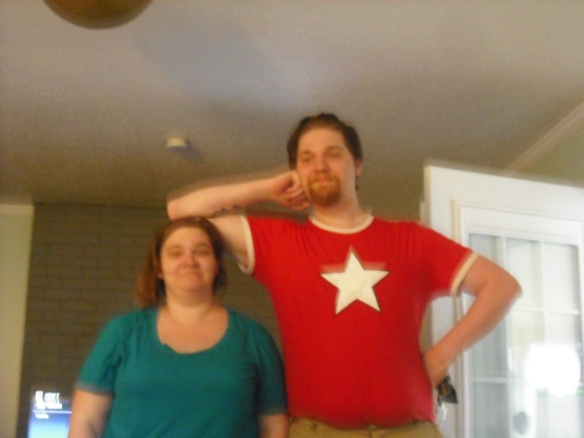 Here you can see how tall he is!  Not a puny little guy!  And I love his red beard!

So thankful that this little baby has grown into a fine young man – even if he makes me cry.