Christmas 2019 is history.  My decorations are all back in the boxes and the boxes are all in the storage area in the basement where they will sit until next December.  Here and there I see a few houses with Christmas lights still up but most of my neighbors have removed all the reindeer, snowmen and nativity sets from their yards.

Gifts have been given.  Some were, no doubt, a big hit.  Others may have been a disappointment.  Store clerks have been busy at the return counters.

Children are counting down the days until they have to return to school while many are heading back to work after a few vacation days.

Here and there I hear comments about the letdown after Christmas.  It is understandable that after all the shopping, decorating, baking, parties and family gatherings, going back to the “normal” routine of life can be a bit of a anticlimax.

But I have to wonder:  If we really understood the true meaning of what we just celebrated – that God Himself came to earth to make things right with us – to restore a right relationship with Him – to bring us His peace – why would we experience such a letdown.

Did we not really “get it?”  The real meaning of Christmas has nothing to do with the decorations, the gifts, the parties, the family gatherings.  It has everything to do with our relationship with this little baby that grew to a man, died and rose again.

Having just celebrated that fact – should not our hearts be filled with joy?

Perhaps the problem is we hear a lot about keeping Christ in Christmas.  What we really need to do is keep Christmas in Christ.  Christmas is only a date on the calendar.  Christ is our source of joy year long.

There were some shepherds living in the same part of the country, keeping guard throughout the night over their flocks in the open fields. Suddenly an angel of the Lord stood by their side, the splendor of the Lord blazed around them, and they were terror-stricken. But the angel said to them, “Do not be afraid! Listen, I bring you glorious news of great joy which is for all the people. This very day, in David’s town, a Savior has been born for you. He is Christ, the Lord. Let this prove it to you: you will find a baby, wrapped up and lying in a manger.”

This is how much God loved the world: He gave his Son, his one and only Son. And this is why: so that no one need be destroyed; by believing in him, anyone can have a whole and lasting life. God didn’t go to all the trouble of sending his Son merely to point an accusing finger, telling the world how bad it was. He came to help, to put the world right again.

Think of yourselves the way Christ Jesus thought of himself. He had equal status with God but didn’t think so much of himself that he had to cling to the advantages of that status no matter what. Not at all. When the time came, he set aside the privileges of deity and took on the status of a slave, became human! Having become human, he stayed human. It was an incredibly humbling process. He didn’t claim special privileges. Instead, he lived a selfless, obedient life and then died a selfless, obedient death—and the worst kind of death at that—a crucifixion.

At this time of year I say “Merry Christmas” to all my family and friends who are close by.  For those far away I call, text and send gifts and cards to wish them the best.

But as I have become a follower of many on WordPress and have enjoyed having some follow me, I feel I have gained friends I don’t even know personally.  Reading the posts of many of you has enriched my life – encouraging me, challenging me and sometimes just giving me a much needed laugh.

I have also enjoyed the comments of many of you who follow my blog.

So – to all of you out there in WordPress land, it is my prayer that you have a Merry Christmas, a Happy Hanukkah, or a great Kwanzaa!

My husband has a big reputation to live up to.

A few years ago our youngest granddaughter was given a beautiful carousel.  As she watched the beautiful colors and the animals go round and round she could not resist reaching out and touching them.  In the process, she broke one of them and the carousel would not work.

Her mother and father both tried to fix it, but could not.  But she was not worried.  She told them to take it to Papa because “Papa can fix anything.”

When my husband got the carousel he knew he had to fix it because he could not disappoint the faith in him that this little girl had.

However, in his attempt to fix the carousel, he actually broke another one of the animals and now he had not one, but two errors on the carousel.

He then began calling all the repair shops, the jewelry stores, any place he thought might be able to help him.

After several weeks of trying to find someone to repair the carousel he saw an ad for a store that sold and repaired watches and clocks.  The store was in a small town some 30 miles north of our home.  Quickly he drove to the store with the carousel.  What a relief when the owner said he could repair it!

My husband was so glad he left the carousel with the owner without even asking what it would cost.

A couple of weeks later he got a call that the carousel was fixed.  The price tag was much higher than he had anticipated – but what price can be placed on a little girl’s faith in you.

It was worth all the effort and every penny as we watch her each Christmas still be so enchanted by the lights, the music and the animals turning round and round.

And of course, she had to buy Papa a cup to declare how true it is that “Papa can fix anything.” 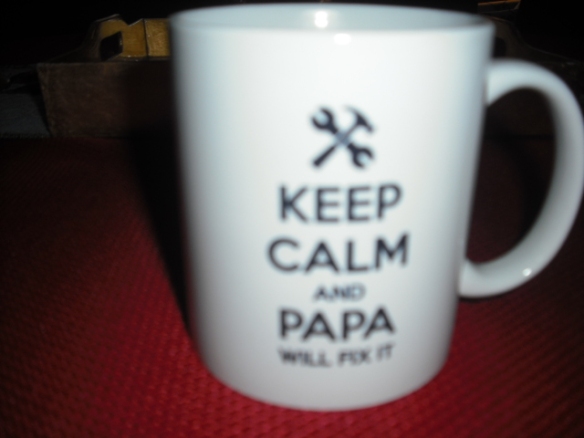 Recently I posted about the “real” story of that first Christmas.  How different it was from the beautiful Christmas cards we see where everything is so neat and tidy and there are beams of light coming from Jesus and sometimes even from Mary and Joseph.

The “Real” Story of the First Christmas

Today I wonder if we truly understand the “complete” story of Christmas.

We read in Philippians of the complete story of Christmas – what it is really all about.

“Jesus has always been as God is. But He did not hold to His rights as God.  He put aside everything that belonged to Him and made Himself the same as a servant who is owned by someone. He became human by being born as a man.   After He became a man, He gave up His important place and obeyed by dying on a cross.   Because of this, God lifted Jesus high above everything else. He gave Him a name that is greater than any other name.  So when the name of Jesus is spoken, everyone in heaven and on earth and under the earth will bow down before Him.  And every tongue will say Jesus Christ is Lord. Everyone will give honor to God the Father.”

The complete Christmas story is summed up in John 3:16:

“This is how much God loved the world: He gave his Son, his one and only Son. And this is why: so that no one need be destroyed; by believing in him, anyone can have a whole and lasting life. God didn’t go to all the trouble of sending his Son merely to point an accusing finger, telling the world how bad it was. He came to help, to put the world right again.”

The complete story of Christmas is about you.  It’s about how much God loves you. 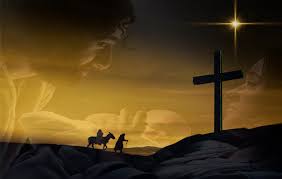 It’s my prayer this Christmas that you see beyond the baby in the manager to the savior on the cross and the empty tomb.

What a beautiful picture we have of that first Christmas!  Mary and Joseph, dressed in plain, but neat, clothes.  The baby is wrapped in a clean blanket and the shepherds and Wise Men all stand or sit on the clean straw.  And one of our most beloved Christmas carols make it all sound so peaceful and clean.

Silent Night, Holy Night, All is calm, all is bright

But was it a silent night?  Was all calm and bright?

According to the Gospel of Luke, Mary and Joseph had just made a long trip from their home town of Nazareth to Bethlehem.  This would not be considered a “long” trip today.  It is approximately 100 miles and MapQuest says it can be made in less than two hours.  However, at the time of Jesus’ birth, travel would have been on foot on rough roads with no Holiday Inn or…

According to the National Retail Federation, a group that compiles information about consumer spending for major American holidays and events, an estimated 165.3 million people will shop from Thanksgiving Day through Cyber Monday.

When looking at Black Friday, it appears there are two opposing groups.  There is the group that loves finding bargains or just enjoys the social aspect of hanging with family and friends.  For many in this group it has become a family tradition that they look forward to each year.

The other group thinks anyone who will stand in line for hours or jostle with other shoppers just to get a bargain must be a little crazy.

Before I continue I must confess I belong to the later group.  I have never gone shopping on Black Friday.  In fact, I try to get my Christmas shopping done before Thanksgiving and avoid the stores as much as possible from Thanksgiving to Christmas.  Dealing with crowds is just not my idea of fun.

I certainly understand the many who love to shop and who enjoy the social aspect of the day, but I must confess it bothers me a little to see all the money we spent buying more “stuff” when our homes are already full while so many in other countries do not even have clean water to drink.  Or, in our country so many are homeless.

I certainly hope I do not come across as a Scrooge trying to take the joy so many get from Christmas shopping.

I just try it might be good when we start writing down our Christmas shopping list to go beyond thinking of our immediate family or circle of friends and look around to see those in need.  Perhaps we could cut down on our own shopping list and help others. 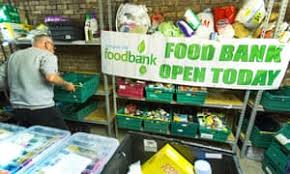 ‘Truly I tell you, whatever you did for one of the least of these brothers and sisters of mine, you did for me.’