My husband has a big reputation to live up to.

A few years ago our youngest granddaughter was given a beautiful carousel.  As she watched the beautiful colors and the animals go round and round she could not resist reaching out and touching them.  In the process, she broke one of them and the carousel would not work. 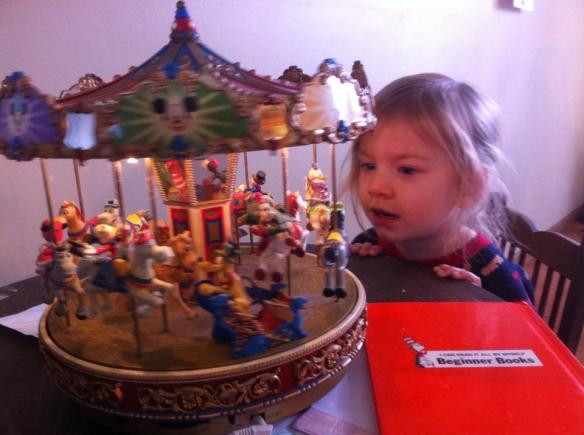 Her mother and father both tried to fix it, but could not.  But she was not worried.  She told them to take it to Papa because “Papa can fix anything.”

When my husband got the carousel he knew he had to fix it because he could not disappoint the faith in him that this little girl had.

However, in his attempt to fix the carousel, he actually broke another one of the animals and now he had not one, but two errors on the carousel.

He then began calling all the repair shops, the jewelry stores, any place he thought might be able to help him.

After several weeks of trying to find someone to repair the carousel he saw an ad for a store that sold and repaired watches and clocks.  The store was in a small town some 30 miles north of our home.  Quickly he drove to the store with the carousel.  What a relief when the owner said he could repair it!

My husband was so glad he left the carousel with the owner without even asking what it would cost.

A couple of weeks later he got a call that the carousel was fixed.  The price tag was much higher than he had anticipated – but what price can be placed on a little girl’s faith in you.

It was worth all the effort and every penny as we watch her each Christmas still be so enchanted by the lights, the music and the animals turning round and round.

And of course, she had to buy Papa a cup to declare how true it is that “Papa can fix anything.”

4 thoughts on “Papa Can Fix Anything!”