Grandma Sechrest was the only grandparent I was close to, the only one that expressed love and an interest in me.  I also related more to her because she was a red head, like me.  All my life I was told that I looked like her side of the family – the Tates.   I never knew any of that side of the family.  I was told they were all “a bunch of Irish drunks.”  As I did research on my family history I discovered the Tates were not Irish but rather English.  So much for family legends. 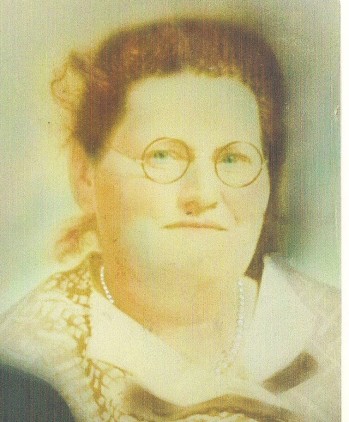 Grandma had a hard life, losing her husband while pregnant with her eleventh child.  He was shot by her oldest daughter’s husband, Wesley Smith.  I never was completely sure of the facts, but the two men had been arguing and Wesley had come into the yard at their house and shot Grandpa.  My father was only 14 at the time and I’m sure it caused a lot of emotional/mental damage.

She loved the fact that I also had red hair – the only grandchild that did.   As she grew older, she began to lose her eyesight to glaucoma.  When I came to visit, I  would stand in the doorway where the sun could shine on my red hair.  She also loved music and was proud that I played the piano.  I would always play the latest song I had learned on her old upright piano when we went to visit.

She loved flowers and before she lost her eyesight her yard and house were full of flowers.  There was always a row of elephant ears planted along the house on both sides and in front.  As she began to lose her eyesight, she gave up the flowers in her yard, but she had flowers in her house until she was totally blind.  For awhile, my mother would come over and water the few plants she kept in the house even though she could not see them.  Just knowing they were there seemed to make her feel better.  It was a sad day when she finally had them take the last plants away.  My dad loved flowers too and I have often thought I get my love of flowers from them.

When Grandpa was killed, all but two of her eleven kids were still at home and she raised them alone.  My dad and some of his brothers would often catch a train, ride to Iowa, Kansas or Nebraska to work in the wheat fields.   They would be gone for weeks on end and Grandma would have no idea where they were until they returned home after finishing the harvest.

When Grandma was in her 60’s she married a retired Southern Baptist minister, Rev. Green.  He and my Dad often spent hours arguing about “once saved, always saved.”

If Grandma got upset about something, she would begin patting her foot.  The more upset she got, the faster she patted her foot.  We grand-kids knew when Grandma was patting her foot very rapidly it might be a good time to go outside to play because she was about to speak her mind to our Dad or one of the other adults there.

It was at Grandma’s house that I saw television for the first time.  She bought a very tiny TV and I would love to watch it when we visited Grandma.  I thought she must be very rich since she could afford a TV.

Grandma’s house always smelled of garlic and cabbage.  She loved cabbage and it seemed that she almost always had a pot of cabbage cooking on the stove.  As she began to lose her eyesight she had her salt/sugar and spices lined up on the shelf in order so that she could still find the right spice for what she was fixing.  She made great chicken and dumplings (which she taught my mother to make) and, of course, corn beef and cabbage.

As I am now a great grandmother myself I find myself thinking more and more of my childhood days.  My red hair, my love of flowers, my love of garlic and cabbage  –  Grandma lives on in me.

I wonder – what will my grandchildren remember about me when I am just a memory?  My prayer is that their memories will be good ones like mine.