A few years ago my husband and I bought our little granddaughter some toy zoo  animals. 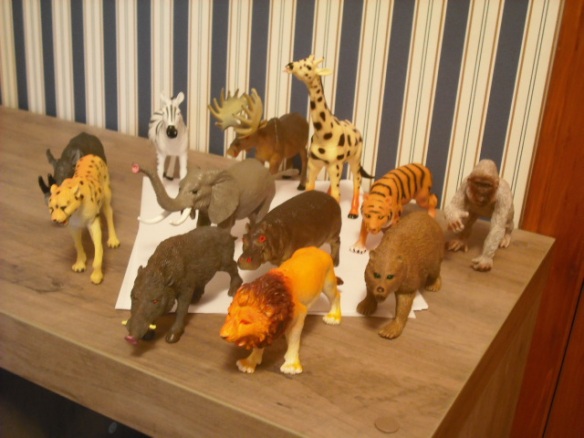 Were we ever wrong!

From the very beginning she wanted someone to play with her and the animals.  In her imagination, she would take them to McDonald’s or to the playground.  Someone was needed to be their voice and order french fries for them or scream with delight as they climbed the monkey bars.

When Mom and Dad and Grandpa all declined the honor, I became their voice.  Thinking the novelty would wear off soon, I had no idea that four years later I would still be their voice.

Oh, the places we have been.

We started with trips to McDonald’s and to the park, but soon we went to even more interesting places like the museum, the mall and Kids Church.

When she began taking Taw kwon do lessons the animals also went to class.

Then there was school.

Oh the roles I have played!

Oh the places I have been!

The animals have even taken on personalities and we have named them all.

And the last two have really become best friends.

I think their names and their becoming BFF is probably because my granddaughter is Zoe and her BFF is Macey.  Whatever we are doing, taking a piano lesson, going to McDonald’s or on the playground at recess, these two are always together.

As she grows older the animals come out of their special home (a big plastic box) less and less.  Just when I think I am through being their voice, she pulls them out again and says with a big smile:

Grandma, let’s play with the animals!

To be honest, I do sometimes get a little tired of playing with them.  Yet I know I will miss the day when the animals are never invited out of their box to play with us.

Then, my little girl with her big imagination will be no longer little.

6 thoughts on “Twelve Little Toy Animals, A Little Girl and a Big Imagination”