The past few months I have felt like Goldilocks.  You remember her. 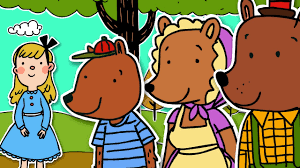 Once upon a time there were three bears who lived in a house in the forest. There was a great big father bear, a middle-sized mother bear and a tiny baby bear.

One morning, their breakfast porridge was too hot to eat, so they decided to go for a walk in the forest. While they were out, a little girl called Goldilocks came through the trees and found their house. She knocked on the door and, as there was no answer, she pushed it open and went inside.

Goldilocks went upstairs, where she found three beds. There was a great big bed, a middle-sized bed and a tiny little bed. By now she was feeling rather tired. so she climbed into the big bed and lay down. The big bed was very hard and far too big. Then she tried the middle-sized bed, but that was far too soft. so she climbed into the tiny little bed. It was neither too hard nor too soft. In fact, it felt just right, all cosy and warm. and in no tine at all Goldilocks fell fast asleep.

It was too big

As time passed I realized this home was too big.  Getting older I found it harder to keep everything clean and did not want to spend my last years cleaning house.  There was too much adventure still waiting for me.

It was too small

So we downsized and our next home we picked was less than half the size of the home we had.  At first it was nice not having too much to clean.  However, we soon realized it was too small.

Not enough storage space.  Even after major downsizing we had, like most Americans, too much stuff.  And it was impossible to do any real entertaining as there was just not enough space for more than three or four people.

It is just right

Next week we move into our new condo.  Bigger than the current house we rent, it has lots of storage and a great room where we can entertain friends.  But it is only five rooms so it will be much more manageable to keep clean.

The story of Goldilocks does not have a happy ending.

Just then, Goldilocks woke up and saw the three bears.  She screamed, “Help!”  And she jumped up and ran out of the room.  Goldilocks ran down the stairs, opened the door, and ran away into the forest.  And she never returned to the home of the three bears.

But I’m thinking mine story will.

Stay tuned to hear how Goldilocks (I mean me) finds her new home.

3 thoughts on “Goldilock and the Three Homes”