Moving from a metropolitan area to a small town I thought I would miss the great musical opportunities I had in the Quad Cities.  My husband and I had season tickets to the Quad City Symphony and we enjoyed excellent music with well-known guest artists.

But recently I discovered great music can be found anywhere.  This month we had the pleasure of listening to a “Brass Holidays” concert by the Mountain Town Band.

This elite brass ensemble was formed in 2016 and includes university trained musicians from all over middle Michigan.  Since St Johns is in the middle of the state, they have chosen to conduct their practices here – and also to give performances here two to three times a year.  They are a brass ensemble in the British brass band tradition, successfully blending impeccable musical virtuosity with an enjoyable audience-friendly ambience.

I was not familiar with the brass band tradition but after listening to this great music, I decided to check it out. 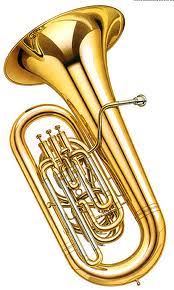 I found that the Brass Band dates back to the early nineteenth century and England’s Industrial Revolution.  As the workers began to organize for more wages and better working hours, employers organized and supported bands as a way to actually decrease their  political activity.  Slowly as music departments began to develop at universities performance improved.  There were 750 brass bands in England by 1860.   Slowly these brass bands have expanded all over the world.

By the start of the Civil War there were brass bands throughout the USA.  Bands were used at rallies to encourage enlistment.  Bands were used to improve morale and were even sent in with the infantry to play during battles.

Today there are hundreds of brass bands in the USA.   There is an North American Brass Band Association (NABBA) dedicated to the promotion and development of the British-style brass band movement in North America

If you get a chance to hear a brass band, don’t pass it up.  You will enjoy it I guarantee.

1 thought on “Music in a Small Town”