My husband and I love to travel without any agenda other than heading in one direction.  As we travel we often get off the main highway and just follow a road wondering where it leads.  Or, we will pull off the interstate into what looks like just a “spot in the road” kind of place.

As new residents in the state of Michigan we are excited about the chance to follow new roads and see where they lead us.

Last week traveling west on one of the state routes that leads from our town, we took a side trip through the small village of Muir.  Driving through the downtown area it appeared time had passed this village by.  Most of the stores were empty and in need of paint and/or repair.  Thinking there was nothing here of interest, we turned a corner and found a hidden treasure. 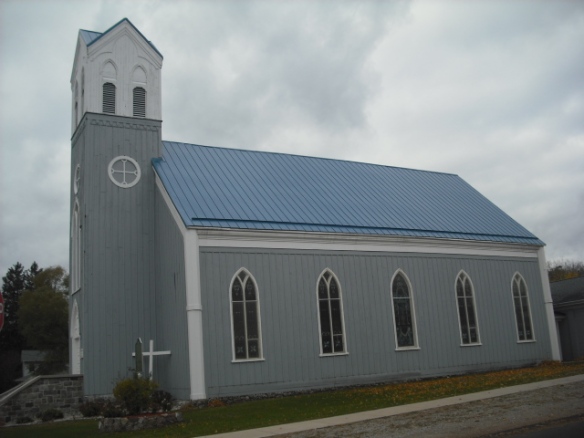 The Mother Church for the Disciples of Christ in the Grand River Valley.

This single-story, rectangular wood-frame church is an excellent example of the Gothic  Revival Church.  Measuring 70 feet by 30 feet, each side has five Gothic windows.  They are so beautiful. 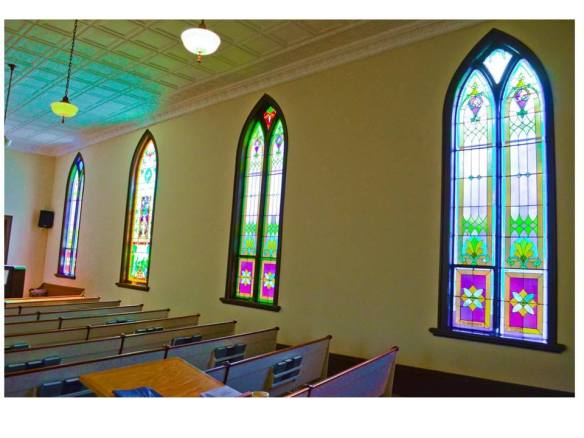 One of the windows was dedicated in 1906 on the 50th anniversary of the church in memory of the founding pastor, Isaac Errett.

The window on the left has an inscription dedicating the window in memory of their first pastor.

For these history lovers this was quite a find.  We love American history and have a large collection of biographies of American presidents.  We knew that President Garfield had been a minister before entering politics.  What a pleasant surprise to find that he had visited and ministered in this very church.  He apparently visited the area often and there are other spots in Michigan claiming a Garfield connection including the Garfield Inn in Port Austin.  This home has been made into a bed and breakfast and boasts that Garfield often visited here when it was owned by the Learned family.

He has been quoted as saying before giving his inauguration speech:

“I resign the highest office in the land to become President of the United States.”

Just six months later he died by an assassin’s bullet in September of 1881.

I found this copy of an article in the Detroit News published in 1930 telling the story of Garfield’s visit to the church in Muir. 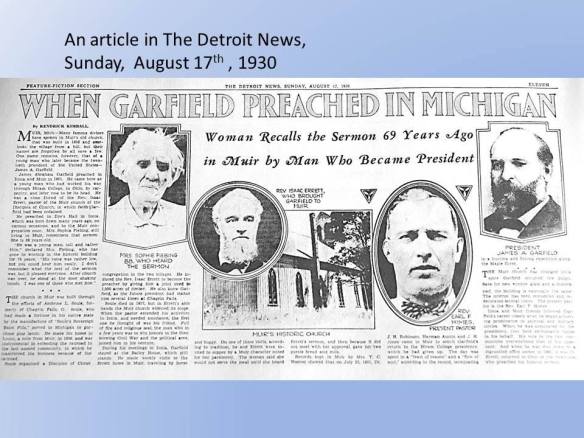 This church building is on both the state and national historic registers.  If we had not followed our spirit of adventure and turned off the main road we would have missed this period of history.

By not following the beaten path we have found many historical treasures like this as well as some beautiful parks, small lakes and other beauties of nature hidden from the main road.

So, when you travel, don’t be in too big a hurry to reach your destination.  Take some time and get off the beaten path.  You will be surprised at what you will find.

6 thoughts on “Getting Off the Beaten Path”