there are two kinds of Christians: those who sincerely believe in God and those who, just as sincerely, believe that they believe. You can tell them apart by their actions in decisive moments.”     Pastor Richard Wurmbrand

Richard Wurmbrand, founder of Voice of the Martyrs was born in Bucharest, Romania. Highly intellectual, Richard was fluent in nine languages.  A couple of years after marrying Sabina Oster, they were led to a faith in Jesus Christ in 1938 and Richard was ordained as an Anglican, and later Lutheran, minister.

During World War II, they tried to share Jesus with the occupying German forces. Preaching in bomb shelters they were arrested and beaten multiple times.

When the Romanian Communists seized power in 1945 Christians there soon realized they had only traded one oppressor for another.  Russian troops poured into the country.

The communists scheduled a Congress of Cults.  At that conference many religious leaders praised communism and swore allegience to the new regime.  While listening to the high praise from religious leaders, Pastor Wurmbrand later reported that his wife, Sabina, challenged him to “stand up and wash away this shame from the face of Christ!” When he responded that to do so would mean she would lose her husband, she said “I don’t wish to have a coward as a husband.”  (Tortured for Christ…Richard Wurmbrand) 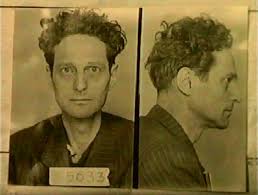 After being kidnapped by the secret police, Richard spent several years in prison.  The police also placed his wife in a workers camp where she had to endure unspeakable hardships.  This left their nine-year old son on his own.  Christian friends did take him into their homes risking imprisonment also.

After 14 years in prison Pastor Wurmbrand and his wife were able to leave Romania.  They founded an organization to help those who are in prison for their faith and their families.

I have written about this organization and the persecuted Christians around the world before but I feel so strongly that they are a neglected group of people. Christians in America feel they are persecuted when someone makes fun of their belief or a show portrays Christians in a less than favorable light.  But we really have no idea what real persecution is.
Feeling Persecuted?
I love some of the quotes by Pastor Wurmbrand.  They reveal his strong faith in Jesus Christ.  These quotes are all taken from his book Tortured for Christ. 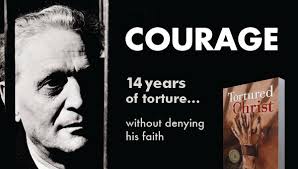 Joy in sharing the gospel

“It was strictly forbidden to preach to other prisoners. It was understood that whoever was caught doing this received a severe beating. A number of us decided to pay the price for the privilege of preaching, so we accepted their [the communists’ ] terms. It was a deal; we preached and they beat us. We were happy preaching. They were happy beating us, so everyone was happy.”

Caring about the here and now

“churches assert their wish to save men from a future hell. Then they should prove their love toward men by helping save the world from today’s hell of illiteracy, hunger, misery, tyranny, exploitation, and war.”

“I tremble because of the sufferings of those persecuted in different lands. I tremble thinking about the eternal destiny of their torturers. I tremble for Western Christians who don’t help their persecuted brethren. In the depth of my heart, I would like to keep the beauty of my own vineyard and not be involved in such a huge fight. I would like so much to be somewhere in quietness and rest. But it is not possible… The quietness and rest for which I long would be an escape from reality and dangerous for my soul… The West sleeps and must be awakened to see the plight of the captive nations.”

2 thoughts on “Two Kinds of Christians”