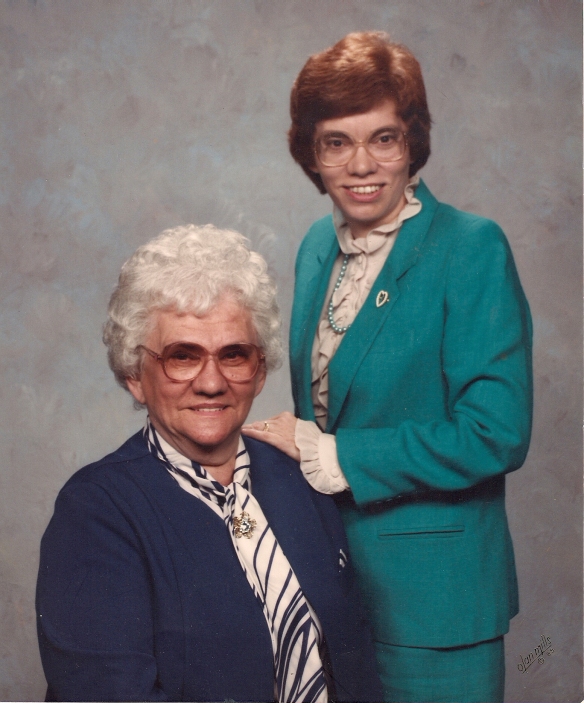 My birthday and my mother’s were only eight days apart so we often celebrated them together.   The year my mother died my husband and I had gone down to her house in southern Illinois in late March so we could celebrate our birthdays a few days early.  For years I lived in the northern part of the state while my mother lived in the southern part and so our time together was far and few between.  I worked a Monday-Friday job and my husband’s job as a pastor took up the weekends so I only saw her a few times a year.

But that was all going to change.  In February of that year my husband retired and now we would have our weekends free so we could make more trips down to southern Illinois to see her.

I was so anxious to tell her that now I would be coming to see her more often.  Being interested in my genealogy I was looking forward to asking her more questions about her childhood and maybe even visiting some of the places where she went to school or lived.

That was not to be.

When I arrived at my mother’s home I found her in a lot of pain.  She had made a doctor’s appointment for that afternoon so my husband and I took her to the clinic.  She asked me to go in with her for the doctor’s exam and it was only then that I found out she had been having problems for some time.

After examination the doctor admitted Mom to the hospital.  He did not seem to be too concerned saying only that she might have an infection and needed some tests and medication.

The first couple of days Mom seemed to be doing fine and the doctors assured me they would soon get to the bottom of Mom’s pain.  I even assured my sisters they did not need to come, Mom would soon be back to normal and I would be taking her home.

I still struggle that I told them that.  By the third day Mom took a turn for the worse and within a couple of days it was clear there was something seriously wrong.  By then I called my sisters that they needed to come, but I always felt guilty that I had assured them there was no need to come.  By the time they got there, Mom was clearly not doing well.

Yet, in a very selfish way, I was glad that I had those couple of days with Mom all by myself.  Being the baby in the family, Mom usually seemed to trust more on my older sisters for help and it made me feel so good to be the one adjust her pillows, straighten up her cover, being a help to her.

So my feelings still are mixed.  Guilty because I assured my sisters they did not need to hurry down; yet thankful for those couple of days of just me and my mom.

Mom was a jolly woman.  I remember as a child when she and my aunt (a Methodist minister) would do the Charleston dance at our family gatherings.  Her pies were the best.  Many Saturdays Mom would spend the day baking pies:  chocolate, coconut cream, apple, peach.  Sunday nights would find our kitchen and living room filled with members of our church who came over to visit – but I think more to enjoy Mom’s pies.

She always made her own crusts but as she got older she started buying frozen crusts from the store.  While I missed her delicious crusts, the pies were still good.  When my husband and I visited, I knew Mom would have a pot of beans (for me) and coconut cream pie for my husband.  Of course, she also had a chocolate pie because that was my favorite.

After Mom died, I grieved for her.  But, slowly, over time I began to get used to not having her around.  Lately, however, she fills my thoughts almost daily.  I think it is because I am getting old myself and as I age, I understand my mother better.  Sadly, I often wish I could apologize to her.  Many times I got irritated at her – and now I find myself doing and saying the very things she did.  I understand her better now than I did when I was young.

But it is too late to let her know that.

Because of my Christian faith, I believe someday I will see my mother again.  While I will try to apologize, I imagine she will just laugh and say “Come on Barbara, let me show you the rose garden”  for she knows how much I love roses.

Until then, if your mother is still living, give her a call and let her know how much she means to you.