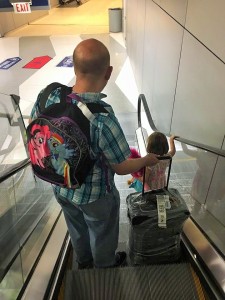 My daughter recently spent several weeks in Sierra Leone tutoring the child of a missionary family that was returning to the states for a year and wanted to make sure their daughter was prepared for school in the USA.  My six-year-old granddaughter accompanied her mother on this trip.

It was a great opportunity for my young granddaughter to experience another culture, to try new foods and see how life is so different in other countries.  Hopefully, it has given her a better appreciation for the blessing of being born in the USA.

When she returns to school this fall and the teacher asks everyone what they did this summer, I doubt anyone will be able to top her story.  “I spent weeks in Africa.”  While there she kept a journal and my husband and I have enjoyed listening to her as she showed us the pictures she drew and read to us the comments she made in the journal.  Some of her comments we can read and some have to be “interpreted” as her spelling and printing are still in a “learning” process.

While she did well during her stay in Africa, as she and her mother began the journey back home, her excitement at the thought of seeing her daddy grew with each passing hour on the flight.  Because they were limited in the amount of luggage they could take, my granddaughter had her backpack filled to the brim with necessary items such as sunscreen and insect repellent but also with those items we Americans count as necessary such as an iPad.   The backpack became heavy as she carried it through the airport at each of their layovers.  But my granddaughter knew relief was in sight.  When they left Africa and she put the backpack on she told her mother with great confidence:

When I get home, Daddy will carry it for me.

After I calmed down from the excitement of knowing my daughter and granddaughter were back home safe and sound, I looked at the picture of my granddaughter with her daddy riding down the escalator at the airport.  My son-in-love had her backpack on his back and she was walking free of any burden.  Just as she knew, her daddy was carrying the load for her.

Then I thought of my heavenly father.  How many times has He carried my load for me when it became too much for me?  When my earthly father deserted me, He was there.  When my first husband was accidentally killed, He was there.  When I was told that my cancer was very advanced and very aggressive and “the odds were not in my favor” He was there.  And just in the day-to-day cares of this life, He has always been there.

So I have to ask myself why is it when stressful times come, that I sometimes forget that? How sad it would have been if my granddaughter thought when she saw her daddy that he would refuse to carry her backpack but leave her to continue carrying the burden although she was exhausted from jet lag.

I keep looking at this picture of the two of them as they ride down the escalator with my granddaughter free of the load just comfortably riding down as her daddy manages the suit cases and has the backpack on his back.  He is not ashamed to wear a “My Pony” backpack.  He is not worried about someone laughing at a grown man with a child’s backpack.  His only thought is to help his daughter and to relieve her of her burden.

So Jesus went to the cross for me.  He was not afraid to bear the shame of the crucifixion.  His only thought was to help me (and the whole world) and relieve me of the burden of my sin.

So when problems come in the future, I will go back to this picture and I will say:

My Daddy will carry it for me!

3 thoughts on “Daddy Will Carry It For Me!”