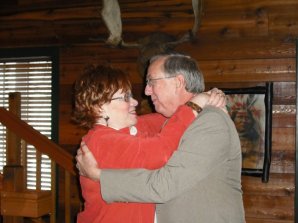 “We as a community of friends are gathered here in God’s presence to witness Paul and Barbara’s renewal of commitment to one another and to ask God’s continued blessings on them. Marriage, like our creation as men and women owes its existence to God. It is His will and purpose that a husband and wife should love each other throughout their life. Shall we pray?”

This was how our Pastor began the ceremony when my husband and I renewed our wedding vows on our 25th anniversary.   It was a special day as we shared with family and friends the story of how we met.  Almost seven years have passed since our celebration of 25 years and we still feel the same.  As we approach Valentine’s Day I love to remember that story.

While living in the state of Washington, my husband, Paul, found himself a single father trying to raise two teenagers. Needing support, he returned to his home town to be near family. He was very lonely and began to pray for a Christian wife. Since he was a minister and also loved to sing, he asked God if it would be possible that this wife would also play the piano and be able to work with him in the ministry.

Her name will be Barbara

While praying, he felt impressed in his spirit that God would grant him that request and that his future wife would be named “Barbara.” He was afraid at first to share that thought with anyone as he felt they would think he was crazy. But it was so real to him he needed to reveal it to someone. He finally related that information with a couple at the large church he was attending.

Four months later I walked into the church with my two young daughters.

While living in Southeast Missouri, my first husband was accidentally killed leaving me with two small daughters to care for. Everything I read about grief told me that I should make no sudden changes or moves for at least a year. However, after a year of trying to make it far from home, I decided to return to Illinois where my family could give me much-needed support. While it was great to be close to my family again, I still carried a heavy load of grief and sorrow. I tried to be strong for my two young daughters, but after a while I realized I did not want to continue living alone. Although I longed to find happiness again, I knew that my daughters’ happiness and safety were more important than my own. If I ever remarried, it would have to be a very special man who would love my daughters as well as me.

I asked God to give me a godly husband who would help me raise my daughters.

One year after moving back to Illinois, I decided to attend the church where my parents were members. When I walked in the foyer, I saw a couple that I recognized. They were friends with my first husband’s parents but I had not seen them in years. They seemed extremely happy to see me, but it was only months later that I found out why my sudden appearance at their church was so exciting to them. They were the couple that Paul had shared his secret with.

After greeting me, they hurried to locate my future husband and tell him, “There she is.”

He had no idea what they meant until they told him the red-head that had just walked into the church was named Barbara. A few weeks later Paul asked me on a date and the rest, as they say, is history.

And a good history it has been. Paul has proven to be a wonderful husband and, even more important, a wonderful father to my two daughters, who are now grown.

5 thoughts on “Our Love Story – “Her name will be Barbara””