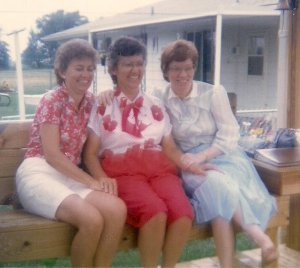 Sisters are a blessing?  Or a curse?

Growing up I was fortunate to have two older sisters.  Time and distance now separate us, but the older I get, the more I like to remember those days when we were young and still free of wrinkles, arthritic backs and grey hair.

My oldest sister, Velma, was often more of a second mom than a sister.  Nine years older than me, she helped Mother out by seeing that I was dressed for church or school and my hair properly combed.  She helped me with my homework and told me stories.  They tell me when I was only a few weeks old Mother went to get me out of the crib to carry me to the car for a trip to town.  Panicked when I was not in the crib, she looked out the window to see my sister holding me in her arms and headed toward the car.  As she approached a ditch she tried to jump over it with me still in her arms.  Unfortunately, she dropped me.  Although I was not hurt, my family always teased me that I had been dropped on my head as a baby (said as they rolled their eyes and laughed).

Velma took home economics in high school and became a very accomplished seamstress.  She made many of my clothes.  During her senior year she made matching dresses for me and herself and we were chosen to model them at a fashion show at the high school.  Night after night in our kitchen Velma would practice with me making sure I knew how to walk, when to turn, how to hold out the hem of my dress as I courtesied to the audience.  On the night of the show I don’t know who was more excited – Velma or me.  Waiting at the back of the stage for our turn with all the “grown up” seniors, I could hardly contain the excitement I felt.  With my red hair in banana curls, everyone was saying, “What a cute little girl!”  I felt so special.  But what really made it so special to me – and still is special after all these years – is I could see how proud my sister was of me.  Her pride and joy in me at that moment still lives in my memory.  (Thanks Velma!)

A year after her high school graduation she married a young man named Gary.  I was heart-broken.  How could she do that?  How could she leave me for him?  She normally shared a bedroom with my other sister, but I was allowed to sleep with her on her last night at home.  I asked her, “Why would you want to go sleep with him when you can sleep here with me?”  How we have laughed about that question through the years?  (After I grew old enough to figure why she would want to do that.)

She assured me she would come to visit me often and I could come stay with her and Gary during summer vacations.  That was not reassuring to me because I thought, “Yeah, she will come visit, but he will always be there”

And He has always been there.  Faithful, steadfast as a husband, father and the greatest “brother” anyone could every want – he has been there for over 56 years.  I can’t imagine life without him in our family.

My second sister was more a playmate.  Only five years older than me she played paper dolls and jacks with me.  She was a giggler and always made us laugh.

Minnie and I took piano lessons when we were very young.  Mother and Dad could not afford to pay for both of us to take lessons separately so they made a deal with the piano teacher.  She would teach both of us.  Minnie would take a lesson one week – then I would take a lesson the next week.  As we played we would share with one another the discoveries we made during our practice sessions.

As a young teenager I looked up to her as a role model.  She was so pretty and so smart.  Knowing I could not compete with her in the looks department, I was motivated to try to match her academic achievements in school.  It’s probably because of that strong desire to measure up to her that I did so well in school.  (Thanks Minnie!)

Minnie and I shared some memories that no sisters should have to share.  But it brought us close in a difficult time.  When our father deserted Mother and the two of us, times were tough.  We struggled financially and emotionally.  Minnie was the breadwinner in our family for a few years as I was still in school and Mother was so scared of going out into the working world.  She took on a responsibility no young woman should have had to do, but I never heard her complain and she never made me or mother feel bad for depending on her for our daily needs.

Thankfully the day came when she also found “Mr Right.”  By this time I was old enough to understand why she would leave and I rejoiced in her happiness.  So thankful for all the years of joy she had with Ralph.

I thank God for my sisters!

This quote from Barbara Alpert says it all – but I especially like the line “who sees you at your worst…..and loves you anyway.

She is your mirror, shining back at you with a world of possibilities. She is your witness, who sees you at your worst and best, and loves you anyway. She is your partner in crime, your midnight companion, someone who knows when you are smiling, even in the dark. She is your teacher, your defense attorney, your personal press agent, even your shrink. Some days, she’s the reason you wish you were an only child. ~Barbara Alpert